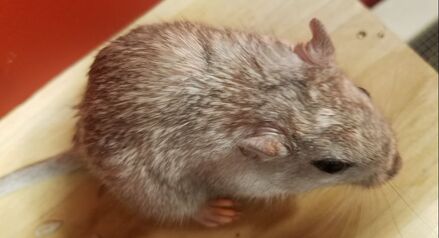 SP01 - Female Spotted Silver Nutmeg
Blizzard, owned by Fabian Hopstaken, Gerbil Hub
This girl has a nice silver coloring on the front pose but the side shots make her look brownish (poor lighting?) I like her body shape and she has a nice head spot. Hard to see the neck spot though.

MOT01 - Female Mottled Black
HHG's ABC Seeing Spot, owned by Diane Nott, Heavenly Heart Gerbilry
​Nice heavy mottling. Side and 3/4 photos are a bit blurry and she's on the move in profile so it's a little harder to assess her shape, but the from-the-back shot was a creative way to catch her, and from there her size and shape look good. Tail appears to be long, straight and well-tufted. Base color is a bit light.
She's a pretty girl, I wish she would've held still!