REX03 - Male Spotted Black Rex
ABC's Deuce, owned by Donna Anastasi, ABC Gerbils
​A few of his whiskers are over curled, which is nice to see. Ideally the whiskers should have some irregularity to them. He has an ok build, he seems quite small or young. His coat is well textured with obivious ripples. Its also fairly plush. His spot pattern is ok, with the nape spot lacking a line of demarcation between the black and white areas. There is some blendig of color along one side. The fur on her tail is bristled, strongly resembling a pipe cleaner. Overall, hes a great example of a rex gerbil, with a plush, rippled coat. He needs more mass to be competive. 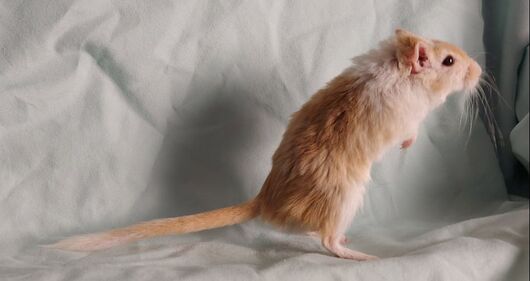 REX04 - Male Rex Pied Argente
REX05 - Male Rex Agouti (pup)
DC's Curly, owned by Jennifer Bell, Dragon Clan Gerbils
​This pup seems incredibly young, I'd guess 4-5 weeks old, which is actually too young to show in a live show. If he is indeed older than that he may be a runt. His coat is fairly nice, it is plush, textured, rippled but it does seem overly long. He's a cute little pup, and I hope to see photos of him when he's bigger, because he has a very nice head.